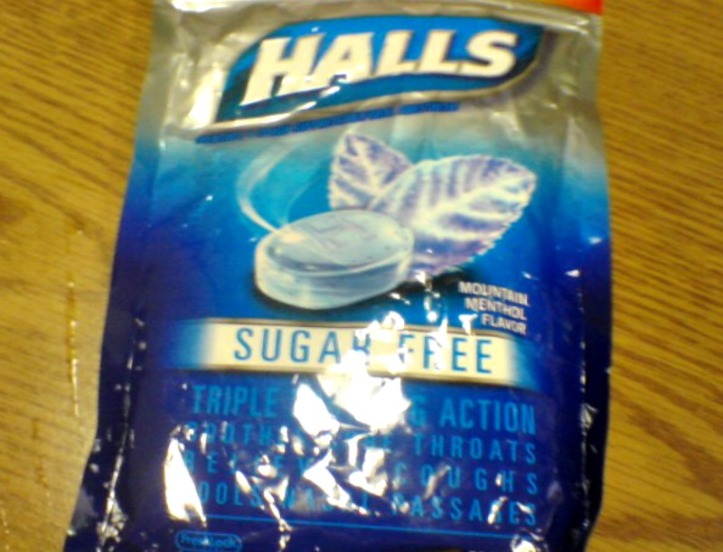 Unfortunately, have been under the weather and had Kyle pick up the industrial size pack of Hall’s Sugar-Free Triple Action Cough Drops in Mountain Menthol which have made the day at work bearable.

Just for the record, I don’t think anyone picks these for the taste as it is very medicinal tasting despite the artificial sweetener; it is solely for the somewhat local anesthetic properties that relieve a sore throat with a cooling action shortly after it starts dissolving in your mouth.

Have you ever licked your way to the center or a Tootsie Roll?  Me neither, so part way through you crunch it and try it it to the side of your throat that hurts the most without choking.

Being Sugar-Free, they are only 5 calories a drop, which is great if you are watching calories or diabetics but as it is sweetened with aspartame, which contains phenylalanine which can cause side effects in some people and there is current debate on its safety in general.   I prefer the sugar-free not just to save calories.    I also am prone to cavities in my teeth and as that has  a statistically higher probability, I’ll stick with the sugar-free.

Also another thing to note, which is indicated on the package, is if you ingest more often than the one every 2 hours it might give you the same sensation coming out as it did going in.   It also said it “could have a laxative effect”.  Enough said.